The worst pain of my life was when I was afflicted with kidney stones. If I ever have another, and I am doubled over in unbearable agony, at least I will know that it could be worse.

I could be watching TikTok.

I had spent my entire life without once going on TikTok. I had never even been tempted. Though I did not realize it at the time, I was living in a state of grace.

Then my editor decided it might make a good story if I cooked some of the more popular TikTok recipes.

My editor hates me.

TikTok, if you are blissfully unaware, is an app on which people from around the world post incredibly stupid videos. There is some sort of a time limit and they are meant to be short, but many of them seem positively interminable.

To familiarize myself with the concept, I watched as many as I could stand, back to back. Several featured the same boy with clear blue eyes who does weird things to his hair. Others showed people lip-syncing to songs or rhythmically contorting themselves in what is meant to be a dance. Most of the rest appear to be videos of cats and dogs, often with humans speaking for them in squeaky voices.

One of the biggest TikTok recipes is something called Mermaid Toast. Invented in 2017 (but everything on TikTok is new to me), Mermaid Toast is toast with cream cheese that has been tinted with swirls of color made with such ingredients as liquid chlorophyll and algae powder, and decorated with edible gold leaf and edible glitter.

When all is said and done, it’s still just toast with cream cheese.

I did not make Mermaid Toast, but I did decide to make perhaps the most popular TikTok recipe ever, Baked Feta Pasta, which is more correctly known as TikTok Pasta.

TikTok recipes tend to be easy to make, and this one is, too. It’s just pasta cooked with feta cheese, cherry tomatoes, basil and olive oil.

Or, if we’re being honest, it’s pasta cooked with too much feta cheese, cherry tomatoes, basil and too much olive oil.

The dish was popularized on TikTok, though not invented, by Yumna Jawad. She uses 8 ounces of feta cheese and 4 ounces of olive oil to go with 8 uncooked ounces of pasta. In a video she shot about the dish, she says it makes 8 servings.

How does it taste? Frankly, it tastes like too much feta cheese. But otherwise, it’s a decent dish. If you plan to make it, I’d highly recommend using 4 ounces of feta and ¼ cup of oil.

I next tried my hand at making Cloud Bread, which is thematically similar to Mermaid Toast. That is, its look is more important than its taste.

Cloud Bread is egg whites whipped to stiff peaks with sugar and cornstarch, and then baked at a low temperature.

Wait a minute. You can’t fool me. That isn’t bread, that is a soft meringue.

And then I made a TikTok KitKat Cheesecake, which is what it sounds like. It is an extra-rich cheesecake surrounded by KitKat candy bars, with chocolate ganache on top and more crushed KitKat candy bars on top of that.

In other words, it is a cheesecake with nearly a pound of candy on it, plus chocolate. And heavy cream.

By my calculation, it has more than 900 calories per serving, and the servings aren’t large.

TikTok KitKat Cheesecake was invented by an Englishwoman, Eloise Head. Based on the nutritional content of her creation, I would guess she is still upset about the Revolutionary War and is taking out her anger on Americans who cook TikTok recipes.

For the record, I will acknowledge that the cheesecake part of the recipe is light and fluffy and quite good — and even without the crust or the chocolate ganache or any of the candy bars, it is still 288 calories per serving.

The last Tik I Tokked was the best, TikTok Salmon Rice Bowl. Created by Emily Mariko, it mixes cooked salmon together with rice, soy sauce, Sriracha sauce and Kewpie mayonnaise.

Yeah, good luck with that. Kewpie mayonnaise is currently the hottest condiment in America, and it immediately sells out anywhere you look for it. Made in Japan, Kewpie is said to be a savory, egg yolk-rich mayo. If you find it, let me know how it is.

I used Hellmann’s. And in keeping with Mariko’s video, I served it with avocado, kimchi and nori seaweed.

Basically, the dish is a very simple salmon donburi — a Japanese dish of rice with, in this case, salmon on it. By definition, donburi is served in a bowl; I used a plate, but if you want to be traditional you could put it in a deep bowl.

The smooth, fatty salmon is cut by the salty soy sauce, with the piquant fire of the Sriracha tamed by the mayonnaise. Eaten on a piece of seaweed (optional, of course), with kimchi on the side (also optional), it is a marvelous combination.

But I’m not going to go back on TikTok to look for another.

Heat oven to 400 degrees. Place the cherry tomatoes in a 9-by-13-inch baking dish. Pour the olive oil on top, and season with salt and pepper. Toss until well combined.

Bake 35 minutes, until the cherry tomatoes burst, and the feta cheese melts.

While the tomatoes and feta are baking, cook the pasta in a pot of salted water according to package instructions until al dente. Drain, reserving ½ cup of the cooking liquid.

Immediately add the garlic and basil leaves to the cooked tomatoes and feta and toss everything to combine.

Transfer the cooked pasta to the baking dish and toss to combine. Add the reserved cooking liquid if the sauce is too dry. Garnish with more fresh basil and serve warm.

Adapted from a TikTok recipe by Yumna Jawad

With an electric mixer on medium-high, whisk the egg whites until frothy. Add the sugar 1 tablespoon at a time and whisk on high until small bubbles form. Add the cornstarch and optional vanilla and food coloring. Whisk until peaks of egg white stand straight up when you lift out the whisk.

Place meringue on prepared baking sheet and mold into a mound or cloud shape. Bake until lightly brown, 20 to 25 minutes. 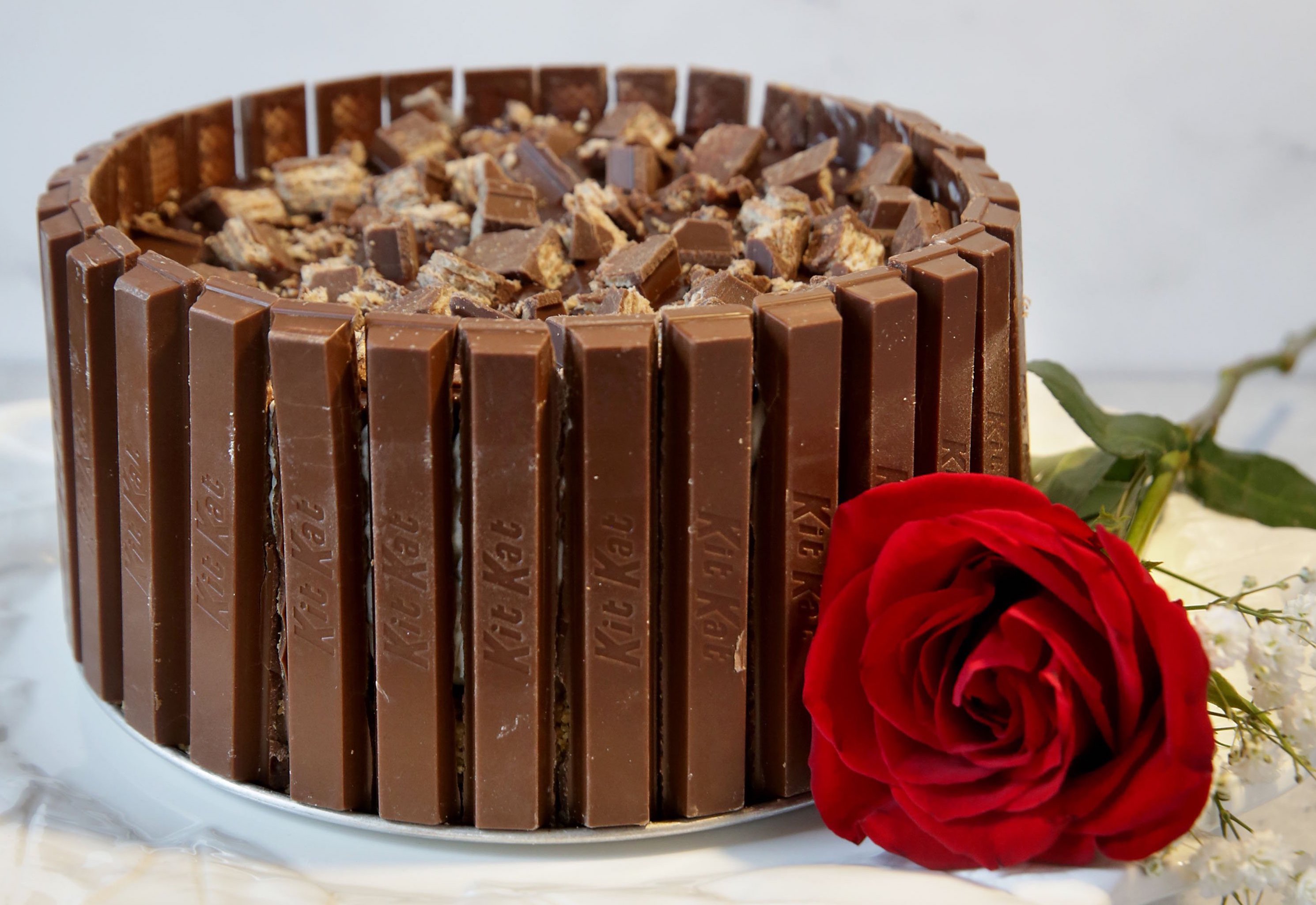 Stand up 32 KitKat fingers around the inside of an 8-inch cake pan, preferably springform.

In a bowl, mix together the cookie crumbs and butter, and pour into the cake pan. Press down on the mixture until it is firm and even.

With an electric mixer, whisk together the cream cheese and confectioners’ sugar until smooth. Add 2 cups of the heavy cream and mix until smooth and thick. Pour this mixture over the base and use a spoon to make smooth. Refrigerate at least 5 hours.

Chop or break the chocolate into small pieces and place in a heatproof bowl.

In a small pot, bring the remaining ½ cup cream to a boil and pour over the chopped chocolate. Wait 1 minute and stir until smooth and thoroughly mixed.

Pour this chocolate mixture over the top of the cheesecake. Top with the chopped pieces of KitKat. Cover and refrigerate at least 2 hours.

Note: Digestive biscuits are a traditional English cookie. They can be found in the international food aisles of many grocery stores and in international markets.

Adapted from a recipe by Eloise Head, via TikTok 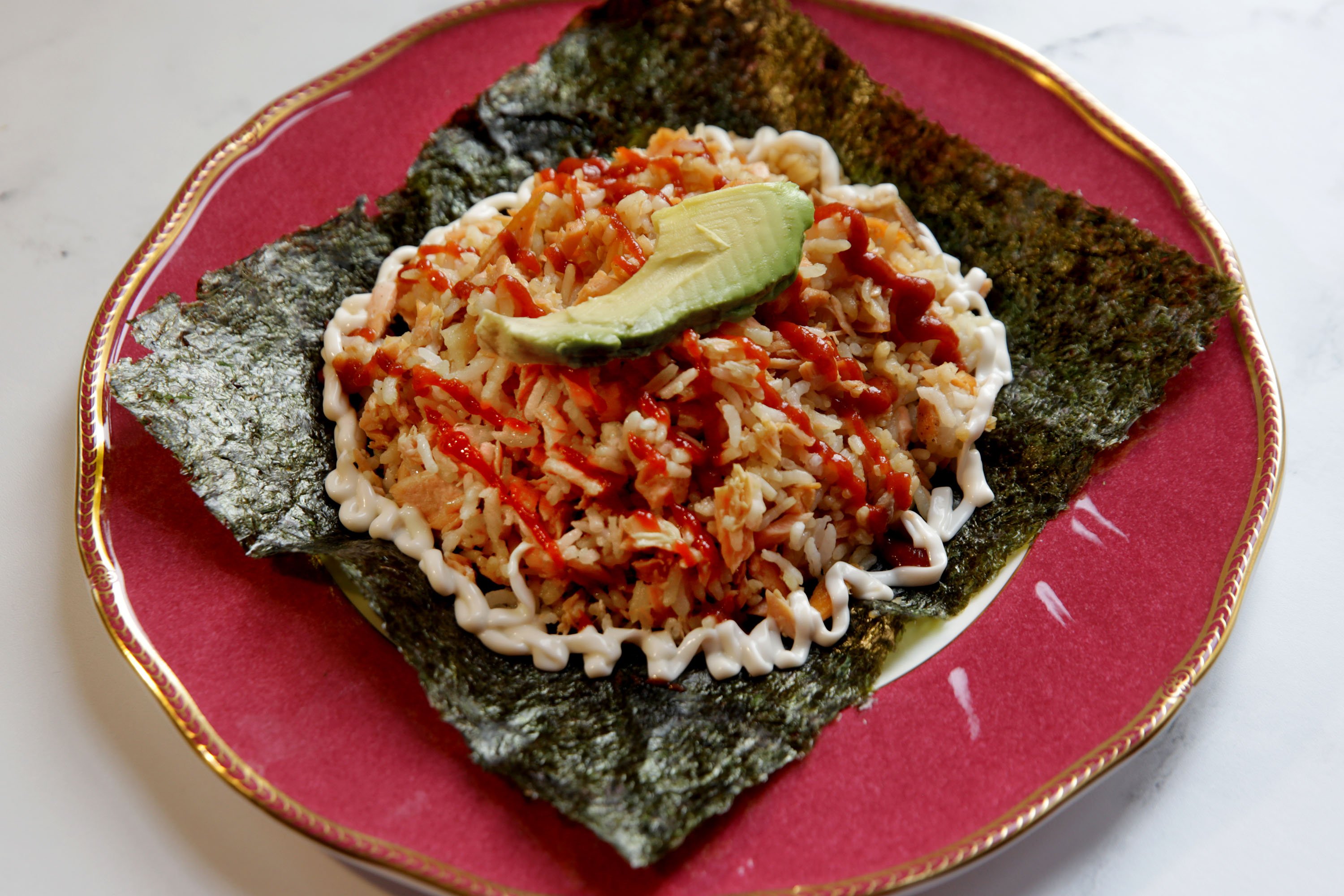 Season salmon with salt and pepper, and heat oil in a small skillet over medium-high heat; add salmon and cook until browned on both sides and cooked all the way through, about 4 minutes on one side and 3 minutes on the other, depending on the size of the salmon.

Finely mash salmon with a fork in a large bowl, and add rice. If using leftover rice, place 1 ice cube on top, cover with parchment paper and microwave 1 minute. Discard parchment and ice cube. (If rice is freshly cooked, skip this part.)

Add soy sauce and stir until mixed. Garnish with Sriracha, mayonnaise and avocado. If desired, serve on snack-sized pieces of nori seaweed, with kimchi on the side.

Recipe by Emily Mariko, via TikTok