This year follows a nightmarish nine months for the restaurant industry. No, it wasn’t all bad in 2020, as we did see many brave new arrivals. The really good news is that 2021 promises a slate of food and drink newcomers about which we’re duly excited. While 2020 brought us a lot of comfort food in form of Detroit pizza and Nashville hot chicken, it seems we’re yearning for a return to finer-ish dining, from omakase to tasting menu formats. While 2021 has had a rocky start, to say the least, we’re still anticipating what’s next for Dallas’ robust dining scene.

Mere weeks into my tenure as the new SideDish editor I received an email from someone inquiring about the status of Loro. The Asian smokehouse and bar from Franklin Barbecue’s Aaron Franklin and Uchi’s Tyson Cole was purported to open sometime in 2020. As much as I was the new kid of the proverbial block, this was something I could speak to with relative authority about the Austin export: I lived nearby.

I would peek around corner, stroll down Haskell Avenue and, nope, still a dirt lot with no action. For much of 2020, the plot of land with a “Loro Dallas coming soon” sign staked into the ground was dormant. In the latter months of the year, though, construction finally began. While the hope of a 2020 arrival was dashed long ago, progress—a concrete foundation!—is churning along and now we’re anticipating Loro Dallas’ 2021 opening. Tony Montero, CEO of Hai Hospitality, the restaurant group behind Uchi, Uchiba, and Loro Austin, says they’re contingent on the weather but is “moving as fast as we can to get it open because we’re super excited to be there.”

When it does debut some time this spring at 1812 North Haskell Avenue, kitty corner to E Bar Tex Mex, expect a melding of Franklin’s approach to smoked meats and Asian flavors from Cole, the chef behind Uchi and Uchiba. That might look like oak-smoked brisket with papaya salad and chili aioli; grilled prime ribeye with yuzu horseradish cream and red miso butter; candied kettle corn with brisket burnt ends and spicy togarashi seasoning for a real melting pot melange of Japan meets Texas.

If you took inventory, though, the long menu is about 35 percent barbecue, says Montro. Not much for a smokehouse, but Loro isn’t trying to just do barbecue among all the great barbecue already out there. Still, the smoked brisket with chili gastrique and Thai herbs remains a top seller, alongside corn fritters with sriracha aioli and chicken karaage. On the drinks end, aside from plenty of beer and wine options, the cocktails and in particular the sake slushees—even in the dead of winter, says Montro—is a popular choice.

The design will look to the historic dance halls of the Texas Hill Country, meaning expansive dining space inside, as well as outdoor deck and patio seating. Even in 2021, an emphasis on outdoor dining isn’t going anywhere.

The roguish chef Ross Demers, who often takes the road less traveled, looks to open his solo restaurant, Cry Wolf, in East Dallas mid- to late February. With approximately 21 seats and 10 at the bar, it will be an intimate spot, whose wide sidewalk he estimates will allow him to double the seating.

It has been a while since we’ve tasted his culinary talents; his résumé includes Oak, Flora Street Café, and Local Traveler.

On the Lamb, his tiny place in Deep Ellum, closed in 2017 despite receiving accolades. The astonishing force and surprising polish of its cuisine led it to be named in our list of Best New Restaurants of 2016. Demers’ food pushed the boundaries of what you’d find in a place that looked like a bar. “Once you’ve had the foie gras with golden gooseberries, it’s hard to look at bar bites the same way,” we wrote. But it lasted less than a year.

Demers excels in small spaces. On the Lamb’s seating came in just shy of 50. This interior is even smaller. Like a hidden gem you stumble upon, only to find yourself drinking Vouvray and nibbling a tagine with sherry lentils and a duck egg.

A nine-item menu he’ll keep pretty fluid will fluctuate in size and price, with small plates to nosh on while drinking wine, or sipping cocktails by Jason Hanshew, who formerly tended at the Libertine and overlapped with Demers at Local Traveler.

Demers describes the menu as owing an inheritance to French gastronomy, the belly of French cuisine. A few months ago, it was still in the stage of sticky notes around the house. Imagine not sea bass or halibut (standard stuff), but bycatch fish and game like guinea fowl. He relaxes into his own style—usually French or Californian in style—which incorporates North African tagines, charred fish, or octopus straight from the wood-burning spit grill that joins a French top in the open kitchen.

“Either clean and light, or super spice-heavy,” he says—Paul Bocuse French or Alice Waters in Morocco.

The name Cry Wolf is an homage to Demers’ mother, who warned him with the tale of the boy whose stories caught up to him. It may be dark, he says, but “That’s me.” An impeccably technique-driven chef who enjoys playing in the shadows. 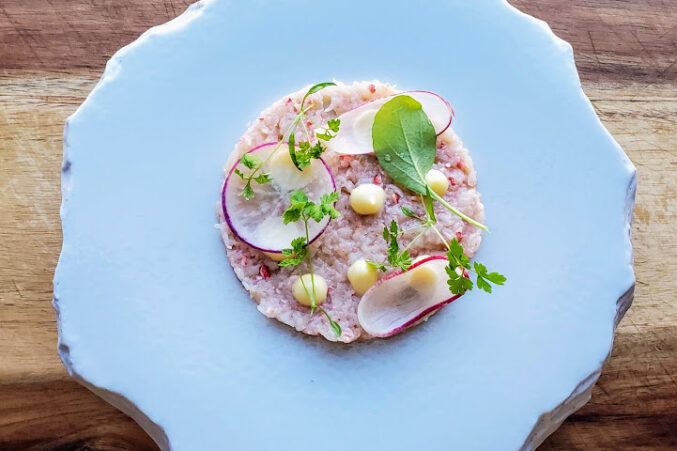 Scallop and Lobster Tartar: tweezer food we can get behind.

Casey and Amy La Rue are used to new climes and new cities, having moved all over the place to work in some of the best restaurants across the country. Casey has labored over fancy food at NYC’s then three-Michelin-starred Daniel, after which he joined the opening team at Per Se, another pantheon of Michelin stars. Later he zipped to Las Vegas and Boston, collecting notches in his French and modernist belt of bona fides. He and his wife Amy, a pastry chef by training, moved from the “literal middle of nowhere” New Hampshire, he says, to Dallas in 2019.

Since then, the La Rues have been here, running pop-ups of Carte Blanche, an ample 13-ish-course tasting menu. Carte Blanche dinners are currently hosted at Garden Cafe on Junius and North Henderson Avenue. There he’s taken diners on multicourse voyage with dishes like scallop and lobster tartare and duck pastrami with braised cabbage and celery root puree, electing for proteins like game meat rather than Texas’ prevailing beef-everywhere menu philosophy.

When Carte Blanche opens, hopefully in March at 2114 Greenville Avenue in the old Mudsmith space, there will be an option for a six-course or 13-course tasting menu, but no a la carte. “It’s kind of all I’ve ever done job wise,” says Casey. “I don’t really want to do anything else.” He’s a chef who sticks to his style. But Carte Blanche won’t be all tasting menus all the time.

By day, it will be Amy’s French background that will be on literal display through her elegant pastries. It will be more boulangerie than coffee house, though for those missing the caffeine offering at this address, there will be a small coffee menu with beans from a to-be-determined local roaster.

The La Rues are still waiting on permits and the greenlight to renovate the time-worn interiors and upgrade the entire back of house. There’s much to be done from top to bottom, but when it’s complete, look forward to a rare Dallas dining experience.

Meridian at the Village Dallas

Quiet powerhouse Junior Borges is coming back on the scene with a project he has been working on for more than a year. The Village Dallas is a massive, 300-acre apartment complex, with putting green, onsite chef’s garden, and 12 food and drink concepts. The central piece will be Borges’ 100-seat restaurant Meridian, where he will be executive chef. (He will also be vice president of culinary for the entire development.)

At Meridian, he will finally be able to infuse his Brazilian roots into food that will toe an upscale line and marry fine dining with novelty.

If anything, the fact that the sprawling project also includes a coffee shop, pool-side burger joint, sports bar, cold-pressed juice spot with smoothies and açai bowls, a food hall with eight stalls that range from tacos to wood-fired pizza and sweets, means it presents a sort of gathering of his entire career: his years in New York, where he worked at Colicchio and Sons and others, as well as his time as executive chef at Uchi and FT33 in Dallas, and as lead in culinary for Headington Companies, where he oversaw Mirador and Americano, among others.

One thing to be particularly excited about is that he is joined by David Madrid, baker extraordinaire, who will flank him to execute everything from wood-fired pizzas to exquisite patisseries and viennoiserie.

American contemporary cuisine with Brazilian influences and flavors at Meridian will mean, for example, that Borges is eager to bring the Portuguese Brazilian tradition of “couverture,” a bread course with small dishes that open a meal—in this case perhaps house-baked Scandinavian caramelized-onion kanelboller with nduja (with fire-roasted tomatoes and basil blossoms) and cultured butter with pickled blueberry powder.

The grab-and-go market MOGO (Modern Goods) will open later this month, with others rolling out in an arc that culminates in April with La Mina and Anise, an upscale regional Mexican restaurant and a wine and nosh bar, respectively, attached to the complex’s Drey Hotel.

Ame
Afifa Nayeb and Sabrina Nayeb are the mother-daughter duo behind this upscale Indian restaurant opening inside the former Hattie’s space in the Bishop Arts District. While Hattie’s Southern brunch is dearly missed after it shuttered early last year, Ame, the finer sibling to 8 Cloves and Laili in the Dallas Farmers Market, promises a refined and elegant look at Indian cuisine.

Thunderbird Pies
That this Detroit pizza purveyor will have its own home base, rather than operating out of the Zoli’s in Addison, is music to this square pie lover’s ears. Thunderbird Pies will settle into its new home at 7328 Gaston Avenue inside the former On Rotation space hopefully this March.

Carbone
With the longstanding Jimmy’s Food Store and the recently arrived Eataly, plus Tarantino’s Cicchetti Bar and Record Lounge on Parry Ave., Dallas has been living la dolce vita. Come April, save room for New York City’s Michelin-starred Carbone, the city’s priciest red-sauce Italian American joint around, which will open in the Design District. Carbone will take over the former Wheelhouse and Sassetta restaurant spaces (Sassetta will relocate to The Joule later this year after some light construction). If the crowds clamoring for $69 veal parmesan and $32 rigatoni are any indication, Carbone’s arrival will be one to watch.

Omakase TBD
With Nobu bone fides and his assuredly sleek Nori Handroll Bar in Deep Ellum, chef Jimmy Park knows what he does well: pristine sushi. Up next, then, is his nameless, forthcoming omakase sushi restaurant coming to Lower Greenville.

Grape 2.0
Not long ago, we were mourning the closure of neighborhood bistro The Grape. Last year, Chas Martin, who operates glam Italian restaurant The Charles, announced plans for an as-of-yet-unnamed restaurant to open inside the former bistro. Martin’s vision is to maintain the cozier, neighborhood vibe of The Grape while bringing in Italian flavors from the business account-friendly The Charles.